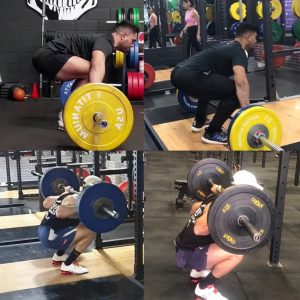 With Over 500 athletes trained through the RDC system, RDC has come up with a proven formular to help athletes become stronger, faster and more mobile than the opposition.

“Is it a silly idea that if you are stronger, faster and can get in better body positions than your opposition, you will have more opportunity to dominate in the game while keeping yourself safe on the field?” – Patrick Searson

"I just wanted to be faster and to learn more about strength and conditioning as a physiotherapist to help me with more athletes... All I can say now is I am faster and my knowledge has increased dramatically.
I also have put on 5kgs of lean muscle"

Most young boys dreams who play rugby is to one day put the First XV jersey on for their country… I was no different.

I carried a football with me everywhere I went and practiced as much as I could, I was always a small child but I had a lot of determination to do well. I became a great tackler from tackling and wrestling my older brothers in the backyard.

It came the time where everyone was getting bigger and the coaches wanted me to gain size too. My natural aspects were to be fast and strong over the ball so the coaches said that it would help me to play even better.

I went from 60kg to 90kg in 1 year… I lost my speed, my knees hurt, my shoulders didn’t feel right and I was blowing every time I ran more than twenty meters. But I was Big and strong so it should make up for it right?

Wrong. I lost my athletic ability. My weapons were no longer my weapons. I struggled on the field and now off the field because I wasn’t being selected in the teams I wanted to play.

It took me One full year to get me back to where I was with my speed before and had dropped down to 80kg, I had missed all the great opportunities to play more in front of selectors while also building up my own craft on the field.

That drove me to learn… I wanted to learn everything there was about training for rugby and why and how our bodies worked.

What were the best methods in the world to train?

Was there an ultimate program?

Was there ultimate nutrition regime?

I became a strength coach / Pt through education platforms. I did my own training and got myself playing first grade in the shute shield when I was just 20 until that was cut short with a season ending knee injury

That drove me even more to learn what I could to stop as many injuries as possible! It lead me down the path to be mentored by some of the greatest strength coaches in the world working with elite athletes all over the world.

This exposure took my training to a new level and the athletes I was training.

I now am here to help people who want better training for themselves, they want an edge over their competition, they’re the ones who want more out of themselves…

With over 500 athletes thriving on RDC programs, I am able to help you according to your goals and give you the best guidance you can have to be athletic, strong and fast.

The longer you take to think about it in my eyes is just time you’re giving to your opposition to catch up or be better than you.